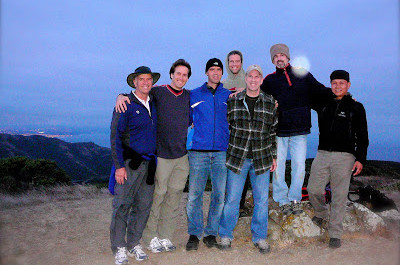 If you’re a guy and you’re not already in a deep, ongoing men’s group, you’re missing out. Especially if you get most of your reflections from the women in your life. There’s nothing that can replace the feedback and challenge you get from a group of no-bullshit guys.

The men’s group that I particpate in (as opposed to the ones that I am paid to lead) has been meeting regularly since 2001. We’ve added and subtracted members over the years; the current group of 8 guys (7 of us are pictured here, overlooking San Francisco Bay) has been meeting since 2003. 4 of us have played the role of leader over the years, and we’re currently a “leader-full” group (different from a “leader-less” group), because at any moment, any one of us has license to lead. We started the group using a David Deida-based curriculum, and have since been shaped by the wisdom of Deida’s teacher Mykonos, as well as Ken Wilbur and his Integral model and The Diamond Approach.

Each of the men in this group is a leader in his own realm (healing, integral coaching, men’s workshops, etc.) and a true spiritual heavyweight. The collective wisdom and power of this group is a wonder to behold. I’ve often walked out at the end of our meetings shaking my head in disbelief. I’ve never experienced anything like it.

The depth of this group has inspired me to create and lead an ongoing Awakened Masculine men’s group in San Rafael. Until the last few years, my Awakened Masculine men’s programs gathered guys for a maximum of three months. My current ongoing group is approaching it’s 4th year. And we’re beginning to touch on some of the depth that I’ve experienced in my original Marin men’s group.

You know the classic scenario: A man ejaculates after sex, then immediately rolls over and starts snoring. Well, this doesn’t happen only because he’s had a long day, and now that he has released his END_OF_DOCUMENT_TOKEN_TO_BE_REPLACED

That's one of the most common questions I get as a sex and relationship coach. I recommend approaching the question by looking at the underlying issues. Is she anxious, agitated, insecure, and END_OF_DOCUMENT_TOKEN_TO_BE_REPLACED

Guys! Are you getting annoyed at the beautiful, loving babes who are throwing themselves at you? Need to find a way to distance yourself from that amazing woman in your life? I’m here to help. After END_OF_DOCUMENT_TOKEN_TO_BE_REPLACED

Men: Have you ever experienced sex with a woman when she’s completely open to you? When she’s a full and uninhibited Yes! to you as a sexual man? If you’ve experienced wild feminine openness, you END_OF_DOCUMENT_TOKEN_TO_BE_REPLACED